"They called the cops Mummy" 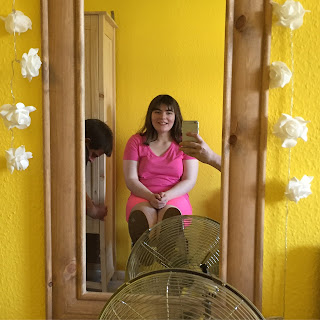 Reading this piece and watching the video in The Telegraph this morning has led me to revisit something that happened to Emily. I'm posting it so that people are not mistakenly believing that this is only something that can happen in America. My heart breaks for this boy and his mother.

On 22nd November in 2016 at her home Emily went into a meltdown. A care worker phoned the police who arrived at Emily's home, with the blue lights lit. They were let into the property by the same care worker and after period of time where she didn't calm and things didn't de-escalate, Emily was placed in a prone restraint on her bedroom floor and handcuffed.

The care worker declined to press charges against Emily and it's a good thing she did, because as I understand it, Emily would then have been taken by the police to the local psychiatric hospital and sectioned.

Apparently with her hands still handcuffed behind her back, Emily went into the living room, picked up the sky remote control and put Thomas the Tank Engine on the TV. The incongruent mix of those two images is making me cry as I type.

When we found out we went to see her. She had marks on her wrists and she put on a youtube clip from 101 Dalmatians of the scene where the maid is locked in a room by the two villains and shouts "I'm calling the police"

I can't imagine ever making that choice myself. Even when I sustained broken bones and alone with Emily in full meltdown, I never made that choice. I'm not better than the individual care worker who made this decision, I just know that the police have a course of action and a protocol they must follow in an emergency. That's why I never called them.

The police aren't social workers, they're not care workers. They deal with emergencies and they deal with criminals and in any acute situation they have to contain it for everyone's safety. That's what they did. Crucially however the police should never have been called in the first place.

We've been offered a meeting with the police and I'm going to accept because this is a reality for learning disabled people in our country and around the world.

Lots of people are talking about lessons being learned from this. What this is supposed to have taught Emily, or anyone with autism, I have no idea.
Posted by Nicky Clark at 11:04

The Catastrophe of casual disablism.

Like pretty much everyone I love Catastrophe. The show written by and starring Rob Delaney and Sharon Horgan details a couple struggling with all the issues that couples struggle with. Family, work, sex, illness, ageing parents and siblings.

It’s written with huge heart and it brilliantly observes the struggles of us all. In the second series the issue of foetal testing in relation to Downs Syndrome was also broached with great integrity and compassion.  It was done without being judgemental because the characters are relateable and the writing was sensitive and measured, whilst still being funny and kind.

If any casual bigotry surfaces, it’s met with a grimace or frown.  It’s brilliantly judged because as with all great writing no subject is taboo but it’s dealt with.

On Sunday I caught up with last week’s Catastrophe.  It was World Autism Awareness Day and I’d been tweeting my film out as I do every year and this year as with many years recently, the terrain for disabled people is tough going. There’s a hardening of attitude from government and a tabloid need for scapegoats, so disability benefit claimants are hounded by the DWP and the public is accepting of it. So I needed to take a break and to vaccinate my brain with laughter.

Watching Catastrophe was wonderful as always. Funny, heartfelt and sad in equal measure.  Rob Delaney and Sharon Horgan are as wonderful on Twitter as they are in character. Tackling the nonsense of Trump and the horrors of sexism, the trampling of women’s rights to their own reproductive choices and the cruelty of anti-refugee rhetoric.

Then watching the show, I felt like I’d missed a step walking down the stairs.

On a trip home to Ireland to visit her dad, Sharon’s brother Fergal produces a photograph of her as a  teenager and as brothers, do he mocked her. When he was asked where he got the photo from, he replied,

Then all three characters laugh.

No frown, no question, just a big laugh. 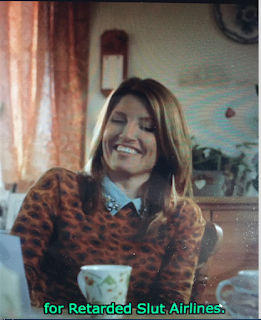 That’s where the problem lies. Fiction, as I’ve always said on the subject of pejorative insults, needs to be free to use language which is unpleasant, because it needs to be highlighted as the actions of unpleasant people. No writer should sanitise the world with censorship to make it as we would wish.

In fiction we can see that unpleasant people, unpleasant characters will use bigoted phrases to reveal themselves as bigots, racists, misogynists and homophobes. This is also true of disablism.

Where I felt the step was missed was that Rob Delaney and Sharon Horgan gave the joke legitimacy. It was ok, because Sharon laughed. It was funny. It was fine.

It was the laughter that changed it from an unpleasant comment to acceptable ridicule. Irrespective of who it was aimed at the word "retarded", is still a punch in the guts. Because it mocks learning disability, not teenage fashion choices.

"Spastic Slut" and "Mong slut" would do that too, but retarded is the last acceptable bigotry because "loads of people say it" so that must mean it's ok.

The problem is that when a well loved character laughs at a joke which uses “retarded” or any disablist slur as it’s axis, at it’s root, then it sends a clear message that this is more than ok.
Laughter is the fastest communication of any stigma intentional or not.

It’s very difficult to raise this as an issue because of the popularity of the programme and it’s makers but actually the normalising of the joke by popular people is the problem. We can’t just question the choices of people we loathe, or disagree with, we have to question everyone or we’re cherry picking examples of the issue to suit ourselves.

The treatment of learning disabled people, particularly in this political climate is worrying and dire. To call out disablism is key. Casual disablism is no different.

I don’t ever ask for language to be banned. I ask for people with a public profile, with the luxury of popularity and with the privilege of creative freedom, to decide whether normalising stigmatising attitudes, really is the serving their core integrity. Or whether in encouraging millions to laugh at a joke with disability at its core, they're actually doing the same as those they decry. 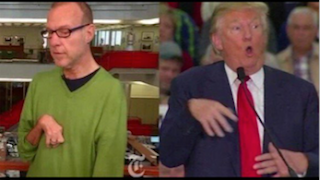