Richard Herring is a "twat" (spoiler alert- he isn't) 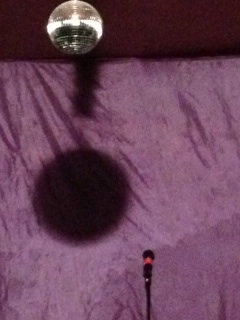 Last night we managed to get to see Richard Herring at Theatre Severn. I say managed because during the day we’d had a pretty bad episode with our 20-year-old learning disabled daughter Emily that I wasn’t sure we’d resolve in time for us to the see his show, aptly entitled, The Best. After 4 trips to her house, and several phone calls in between She was eventually calm and happy enough for us to leave her.

So we got to the show. Unbelievably we weren’t the last in. I had no makeup on from crying and Phil was bruised and we were both really shaken up by it all but we made it. It was really important for us both to laugh last night.

It was a collection of highlights of some of Richard Herring's best work and remind us all why he is the best at what he does. I saw him in the same theatre a few years ago and at one point the microphone and then the lights failed. He kept going, making up new material on the spot about the technical failure and we kept laughing.

He’s also a twat because he has a diva requirement in terms of what he expects from the theatre staff. At the end of every show the staff stand at the doors holding collection buckets raising money for Scope.  That’s the problem with celebrity culture these days. It’s all about them. Bastards.

Probably one of the most obscenely annoying traits Richard Herring has, is in his attitude towards making jokes about subjects, which some people don’t think anyone should find funny at all. Because Richard Herring is a twat, he deals with it in a nuanced and balanced way. Mining the subject for the inherent humour rather than laughing at the subject itself.

I wrote a piece about rape jokes a couple of years ago for The Independent. I didn’t write the headline, I made a point that laughing at rapists is the key, not their target.  It’s a tricky issue but it’s an important one because I think humour is a lifesaver but that’s just me.

I need to make clear that I don’t think it should stand in lieu of the emergency services. I don’t want to give the Tories any more ideas especially as they’re currently very busy trying to tell us why we should vote for them. Actually not for them, so much as for interim head teacher Theresa May.

The woman who repeatedly tells us that she’s so strong and stable, she needs Donald Trump to help her walk across a flat surface. I don’t know what Michelle Obama was doing highlighting that fact that slaves built the White House, but she needs to rethink their walkway crafting ability, because it made our Prime Minister have a little wobble and The Donald, famed for his chivalry, had to reach out and grab her. He did his boy job brilliantly when she had that girl job wobble.

That’s like saying ice cream and wafers are the same thing. They often exist in the same area but their physical components are so different as to be entirely distinct from one another. Try making a coke float with an ice-cream cone rather than actual ice cream and you will see the wisdom in my logic. Also you may have to Google “what is a coke float” But more importantly when you’ve finished doing that you could come and rescue me from my analogy, which I’m lost in, and actually I'm starting to feel a bit frightened.

I read a blog this week, which lifted a quote from another comedian’s show. The quote was about rape and the joke was about the juxtaposition of sentencing for murder as opposed to the rape of an elderly woman. The joke wasn’t mocking the elderly woman it was stating the fact that if you rape an elderly woman with dementia the sentence will not reflect the crime.

That’s a serious point wrapped up in a few minutes of a 60-90 minute comedy show about other serious things and delivered to people, who, it’s doubtful, would ever attend a lecture on the issue. But because that comedian is also a twat the blog tended to focus on how offensive that comedian is.

It’s all about the proportional responses to punch lines and storytelling but it’s also about confirmation bias.

To put it another way ”Seek and ye shall find” said the catholic priest to the choirboy.

That was all you. You made that offensive connection and I'm ashamed of you.

My life from the age of twelve when my brother died has been pretty "challenging" and disability has been a large feature of my life. Michael's heart condition, my sisters asthma, Mum's Alzheimer's, Lizzy, Emily's and my Autism, etc.

I campaign and write on the subject and have fought very hard against disablist and disabling attitudes. The lack of empathy which is so popular along with the rise of populism is worrying and exhausting to tackle,That’s why I’m not keen on humour, which in anyway, denigrates, mocks and further humiliates people over something which they can’t help ; like illness, disability, skin colour, sexual orientation and inherent gender.

Religious beliefs don’t fall into this category because they are a choice, without accompanying evidence. Where the power balance remains manifestly in the hands of the structures and systems of the hierarchy of religions, leading to proven abuse of us, by them; then we should all resist doctrine and punch upwards with humour, because they can take it. If your religious beliefs are so shaky that Ricky Gervais's atheist tweets compromise your beliefs in some way; perhaps you should address whether your beliefs are strong enough to justify you determinedly ordering women what to do with their own bodies and reproductive choices.

More than anything we need to recognise that humour is very subjective and links directly to our emotions. A short time after my brother died I was watching an episode of the Dave Allen show. Far ahead of his time in challenging the systems and structures I’ve just mentioned, he was and is, a comedy genius to me.

The sketch concerned two funeral processions approaching a cemetery and then both racing to be the first at the graveside. I watch it now and laugh. I watched it then and cried.

Timing is everything in comedy. But for those offended, it’s worth investigating whether the timing for you, in your own life, is robbing you of a clear perspective. Reflecting on whether it's emotion, or intellect that has triggered your anger is important. It might be both but a default to your own emotion alone needs closer examination. Placing the context of the joke into the context of your life is just an idea but one that is worth at least some consideration.

Yeah that’s “funny”, as is the fact that they endure hate crime, sexual abuse, financial abuse, violence and neglect and routinely entirely disenfranchised in society, buddy. Retard and retarded mean learning disabled. Dress it up anyway you want, you mean learning disabled people and you know you do. I don't want the word banned even though, naturally in asking people to choose not to use it, that's what people have assumed and argued with me about. That's why my twitter name is Mrs Nicky Clark. It's not some kind of anti-feminist reclaiming of subservience to my husband's surname, it's a reference to the fact that when I started campaigning many people suggested I was a pseudo Mrs Mary Whitehouse.

Annoyingly for them free speech is still free when it's me using it.

Comics who rely on this type of reaction laugh, are lazy and their audiences are lazy too.

Richard Herring expects his audience not to be lazy and his comedy isn’t lazy either. This is why he’s a fucking twat.
Posted by Nicky Clark at 11:07