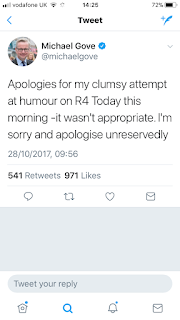 When asked what they thought about the Today programme Gove replied "Sometimes I think coming into the studio with you John, is a bit like going into Harvey Weinstein's bedroom"

Gove added "You just hope you emerge with your dignity intact"

After receiving cross party and public condemnation, Gove began trending on Twitter. Then he apologised.

Neil Kinnock hasn't. He has issued this statement :

“In an off-the-cuff comment I made light of Mr Gove’s remark on a live programme.

“Apologies if that caused offence – I certainly do not treat the recent allegations as anything but grave and repellent.”
Apologies if that caused offence, isn't an apology.
It's a non apology, apology which completely disregards the damage his joking has done.It sidesteps taking responsibility.
I've seen many of the Labour MP's I respect tweeting in condemnation of Gove, but so far nothing comparable in respect of Kinnock.

I don't know why this is but Kinnock, who is equally culpable by replying in kind, is being shielded from strong criticism if he isn't treated with the same angry responses as Gove.

For absolute clarity, when a foolish man makes a stupid sexist joke the correct response is to call him out, not banter back. Joking about sexual harassment of women targeted because of their gender, is sexism. The assault & abuse is misogyny.

For equal clarity if a member of your own party who just happens to be a veteran former leader makes an equally crass sexist joke, you treat him with the same degree of censure.

If we cherry pick our condemnation, we send a message about power structures and enablement which the news and allegations about Weinstein have highlighted as being a casual factor.

Both Gove and Kinnock enjoy privilege and platforms. Both deserve approbation.

Two white middle aged men in public life have found themselves at this point in the unveiling of the Weinstein story, to make jokes in public. Lucky them, they clearly have no concept of the lifelong effect of sexual abuse and enforced silence.

Isn't that one of the tools that keeps women silent, dehumanises them when they muster the courage to speak out and in the meantime keeps all predators safe?

We owe a debt to every woman who has suffered, a solidarity of support and condemnation of those who minimise gender based suffering with casual disregard.

We also need to send a clear message to those still yet to speak, that they will be heard and listened to as we work to change society for the better of all.

The many not the few.