The othered woman, the she devil and the naughty scamp 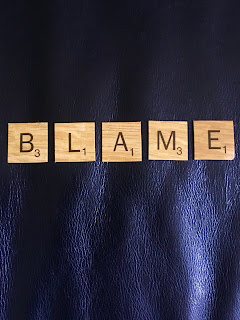 This morning I woke up thinking about women. I think about women a lot these days.

First of all I need to issue a disclaimer, I'm a woman and this has to be said up front. It needs to be said because this post is about the space women occupy and as I'm fifty two, I'm aware that any space occupied by older women needs to be tightly monitored and limited.

In the media, I'm a non person. I'm not famous and I'm not young and I'm not male, so before the patriarchal police knock down my front door and drag me away, I'll quickly share my thoughts.

The news over the last couple of weeks has been about sex and the relationship which two women had with one man. One of the women in this familiar triangle of pain, knew about the crowded nature of the relationship and the other didn't.

But both women were judged and found to be wanting. The man did his tousled haired shrug, no doubt and potentially smiled a smug smile of "What am I like eh chaps?"

In both cases the women occupied spaces they where the rules are gladiatorial in approach. When the man in question is famous, the women concerned enter the space sometimes willingly but more often than not, unwillingly and in either respect, the arena crowds bay and howl for their triumph or annihilation.

We're the arena crowds. On social media or traditional media, we can virtually raise or turn down our thumbs at the press of a button. Caesar would have been delighted. He would also have recognised what it is to be in the public eye and unexpectedly stabbed repeatedly into oblivion.

Now both the women in question have their supporters. They also have the patriarchal approach to support when it comes to women and it's this, "If you're going to support a woman in public, make sure another woman is being trashed"

It's impossible to report the marital affairs of a famous straight married man without moving swiftly from his actions to hers.

The "her" in question will be his wife and his affair partner. The "other" or more accurately, othered woman will be subject to the patriarchal "Fitness to fuck" test.


Once these two clear parameters are achieved the rest is down to a choice. Who do you support?

As strangers to all concerned parties, the "Fitness to Fuck or Fuck over" test gives us licence to judge the women at will.

But we must choose and never  ever must we approach the man with anything other than a metaphorical head tousel and a gentle quasi-rebuke of "Oh you naughty scamp, did you let your penis decide again?"

Once the othered woman has been scrutinised with our eyes, we move on to x-ray her character. Because we know don't we, what is in her heart and mind with just a few judgements and the opinions of others.

The patriarchy uses the experience of women to inform their opinions too. If you've been the othered woman you will be in defence of the bothered woman, because you were manipulated, hurt and usually left, by another straight man with an uncontrollable penis.

He will have told you so many awful, unforgivable things about his wife and yet he returns to her so often.

She is a manipulative monster who is awful to their children and will use them as a weapon, isn't she.
She is a frigid she devil who refuses to have sex with him, doesn't she.
She is just there to bask in his reflected glory and won't even work because she's too lazy, isn't she.
He would be with you but he's just a decent person and can't leave her because she'd have a breakdown, wouldn't she.

Anything he says about her to you will be mirrored , in what he will say about you, to her when it eventually comes out. It will be awful, it will be lies and it will bear no relationship to you as a person. He's very good at that.

You need to apply critical thinking to his justifications and consider that marital affairs almost always begin and end with his mouth and your brain.

Remember too, that even if he does leave her your future will carry the shadow of the circumstances in which your relationship started. If he did it with you, he'll do it to you.

There are ways of achieving that without causing devastation to other women. There is nothing remotely feminist about intentionally hurting another woman, even a woman you don't know, because her husband is manipulating you into believing she's a monster who doesn't deserve him. No woman deserves to be punished for an opinion spouted by a man who is deliberately hurting her for his own gratification. Whether she knows or not, the damage to his primary relationship is marked by the efforts he makes to cover up his deception. He could be using that time and energy to get counselling to address his problems.

If you choose someone who you know is already in a committed relationship, you need to ask yourself what your primary driver is for doing so. Because the net result when a straight married man has an affair,  is that a woman always gets hurt by the betrayal, that's a known, known.

Now betrayed wives of the world listen up.

If you enter into the torture chamber of "she is better than me" you're lying to yourself.

It's not a competition, it's not a statement about you, unless she held a gun to his head.
Which, let's face it, is more erection defying than Nigel Farage's face on a condom wrapper.

SHE DIDN'T MAKE HIM DO IT.

YOU DIDN'T MAKE HIM DO IT.

HE CHOSE TO DO IT AND TO BLAME YOU BOTH FOR DOING IT.

Don't play his game. Don't believe the lies. You are both his victims.

The worst case scenario is that you fail to recognise where the blame lies.

From women "with the good hair", to "three of us in this marriage", from "violet eyed co-stars" to Anne Boleyn, there is one constant throughout the millennia : men are very protective of their penis and they don't put it anywhere by mistake.

Research shows that the vast majority of men who seek sex outside the marriage do so with women who are significantly less physically attractive than their wives. But sex outside of primary relationships is reliant and driven by fantasy, opportunity and proximity. It's not for nothing that the coincidence of women in the workplace and the rise in the demographics of affairs, combined.

Reality often dawns only with the devastation. When you let the light in on any daydream it kills it as dead as a stove top boiled rabbit.

Remember to that it's about his ego. In defending himself about his behaviour you're anger at the bothered woman will be feeding this. "They're fighting over me now, because I'm so special"

It's a choice and you may feel at your most powerless, angry, devastated and blindsided but you have a choice too. You can decide to place the blame where it (or more accurately, he) lies.

On the patriarchal excuse meter the "lamb to slaughter" myth of the scheming female, is an important myth to remember. Problems in marriages exist everywhere. Having sex with someone else, isn't the way to fix it and it isn't the choice of every man (or woman)

If you decide to stay and embark on counselling be very very careful who you choose to drag all this up with. Another rule of the patriarchy is the counselling myth that there is blame within the marriage  (AKA the wife) whereby his penis is forced to run wild and free "because sad".

Yes there are reasons for marital problems, but a poorly managed zip reflex is the one to concentrate on first.

Addressing marital unhappiness with the person you're married to is what adult humans do.

Entering into secret "sex therapy" with a third party because you're unhappy, is just another justification for a shag. Allowing that myth to take up residence creates a reason to dodge censure.

Betrayal should receive censure because it allows for the focus to create introspection and self-awareness. Otherwise as we've seen in recent weeks, it just happens again and again and again.

Whether in the broadsheets, tabloids, online, or anywhere else where the public discourse is shaped and moulded we need to make space for women without judging, labelling and ultimately branding them for the choices men make.

More than anything else, we need to stop polarising the stories of our lives and the lives of others in the binary terms of "Her versus Her."